Sharing the insights I discover as I explore and experience the mystery that is our reality. Join me in my journey and share yours.

Interview with Corinne Rodriques: A Glimpse into Christian Life in India

I have  been visiting Corinne Rodrigues' blog for just about as long as I've been blogging! I have had the pleasure of getting to know her through her writing as well as through conversation as we both share time with a great group of mutual bloggers. If you want some encouragement and inspiration make sure you check out her blog:  http://www.everydaygyaan.com/   You will find yourself coming back again and again! That has certainly been my experience.


In a recent post recognizing this blog's first year I mentioned that I will be adding more interviews with individuals I find inspiring and that I feel have something to share with us. When brainstorming those I would potentially interview, I found Corinne at the top of my list.  She is a Christian living in Mumbai India. I was interested in asking her a few questions and hearing about what her Christian experience was like, living in a country where her religion is represented by only 2 % of her country's population.


I'd like to thank Corinne for taking the time out of her busy schedule to answer my questions and for providing the images for this post. Thank you! :)


I hope you enjoy the interview and, as always, I'd appreciate any comments you might have in the comments section. Thank you! 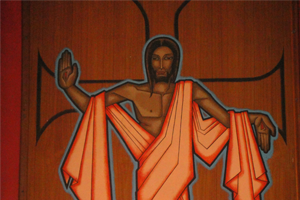 An image of Jesus inside a Chapel in India


AscendingtheHills:   Us Americans, tend to complain a bit about such things as prayer being taken out of schools and nativity scenes being taken down from the centers of our towns. And yet, Christianity is ascribed to by the majority of our population and practiced widely. According to wikipedia The religions represented in India include : Hinduism accounting for 80.5% of the population of India. Islam (13.4%),Christianity (2.3%) and Sikhism (1.9%) are the other major religions followed by the people of India.


Ascribing to a religion that consists of a little over than 2% of your country's population..have you experienced any particular challenges in expressing your religion or practicing it in any way? What is the atmosphere like in your city towards those who practice Christianity?

Corinne:  India is a very religious country but also one that has historically been known to  assimilate and integrate various other religions. Personally, I have never experienced any bias towards me because of my religion.

I studied mostly in Catholic schools and I know that the other girls were very respectful of Christianity. Most non-Christian students of Christian institutions will very proudly rattle off The Lord’s Prayer. In many Hindu homes in India, you will see a picture of Jesus or Mary or both displayed with the pictures of their deities. Hinduism, in its truest form is not a religion, but a way of life.

However, with the rise of religious fundamentalism all over the world, we have seen the emergence of radical Hindu fundamentalism. They are severely opposed to conversion to Christianity and have been known to violently attack missionaries. They also attempt to ‘reconvert’ people back to Hinduism. I must add that this has been fanned by the over-enthusiasm of some foreign Christian missionaries who are often insensitive to the Indian culture and intolerant of Indian religions. By and large, the Catholic Church has made a much greater effort towards inculturation of religious ceremonies.

Over all Christians, more particularly Catholics are respected for their efforts in education, health care and social service. When Mother Teresa died in 1997, she was accorded a state funeral.

AscendingtheHills: Has the dominant presence of other religions and philosophies that are so strongly interwoven within the culture of India and so different from your own added to your practices in any way?


Corinne: Christianity continues to be largely Western in urban India but it is in the villages that you will find the true interweaving of Christianity with Indian culture. The early Church in India learned to be Christian in religion and Indian in culture. It was the Portuguese and later the British who attempted to give India a Western orientation. In the Catholic Church, there has been a shift post the Second Vatican Council which stated: "All nations form one human family; all of them are guided by the one God, all of them have the same destiny... The church exhorts Christians to preserve and promote the moral and spiritual goods found among the people."

We see the evidence of this change in use of Indian languages in the Church, in the building of many Christian 'ashrams' in which practice of meditation and yoga is taught, in the telling of Bible stories using Indian music and dance forms. The Catholic Church has realized that evangelization is not conversion, but bringing about the Kingdom of God - justice, equality and freedom for all.

Sadly again, some Pentecostal Churches (usually from the USA) have begun to influence certain segments of Christians and attempt to convert people.
Christians in India also struggle within themselves to get rid of the very strong influence of the caste system, which permeates even the Church. 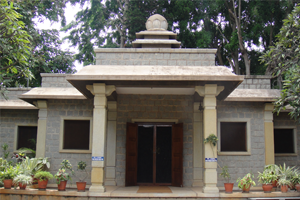 An example of a Christian chapel in India

AscendingtheHills:  From your experience, have you found Christians in your city to be more or less tolerant of those ascribing to other religions, considering they are in the minority? Or does this create the propensity for them to stick more together, and become less tolerant and more defensive towards their beliefs?


Corinne: I find that in certain places in India, Christians do tend to stick together - and Mumbai is one of them. Also some Indian Christians considered it necessary to move to other countries - mostly Australia and Canada for fear that they would not have equal opportunities in India. However, this is a misconception. My father and his brother served in the Indian Army and faced no problem because of their religion. My husband, brothers and I have never faced any discrimination in our various careers. We, therefore, see no need to immigrate or confine our social interaction to Christians. 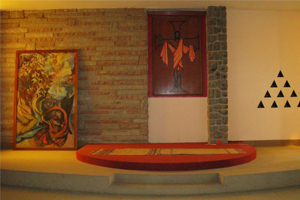 Inside an Indian style Chapel


AscendingtheHills:  How has being exposed to such a diversity of other religions affected your perspective towards religions other than Christianity? Do you see elements within them that you have come to appreciate?

Corinne: I am proud to be an Indian Christian - and have never felt that my faith or beliefs have been threatened by Indians of other religious beliefs. I have been deeply influenced by the tolerance and inclusiveness of the Indian culture.

My husband practices Vipassana which is Buddhist in origin. I love listening to Indian bhajans and would someday like to read the Hindu Scriptures. I am more open to meditative and reflective practices than to the traditional rote prayers. I believe that we can learn a lot from our ancient Indian tradition and culture. I would like to share with you a poem written by one of our great Indian poets, the Nobel Laureate, Rabindranath Tagore:

Where the mind is without fear and the head is held high;
Where knowledge is free;
Where the world has not been broken up into fragments by narrow domestic walls;
Where words come out from the depth of truth;
Where tireless striving stretches its arms towards perfection;
Where the clear stream of reason has not lost its way into the
dreary desert sand of dead habit;
Where the mind is led forward by thee into ever-widening thought
and action--
Into that heaven of freedom, my Father, let my country awake.
-- Rabindranath Tagore

That is my wish for all humanity that we awake to our commoness and move towards a heaven of freedom.

Thoughts? I'd love to hear them! Please leave them in the Comments section. Thank you!
Posted by Jessica M at 6:54 AM

Promote Your Page Too

Interesting Blogs and other Resources